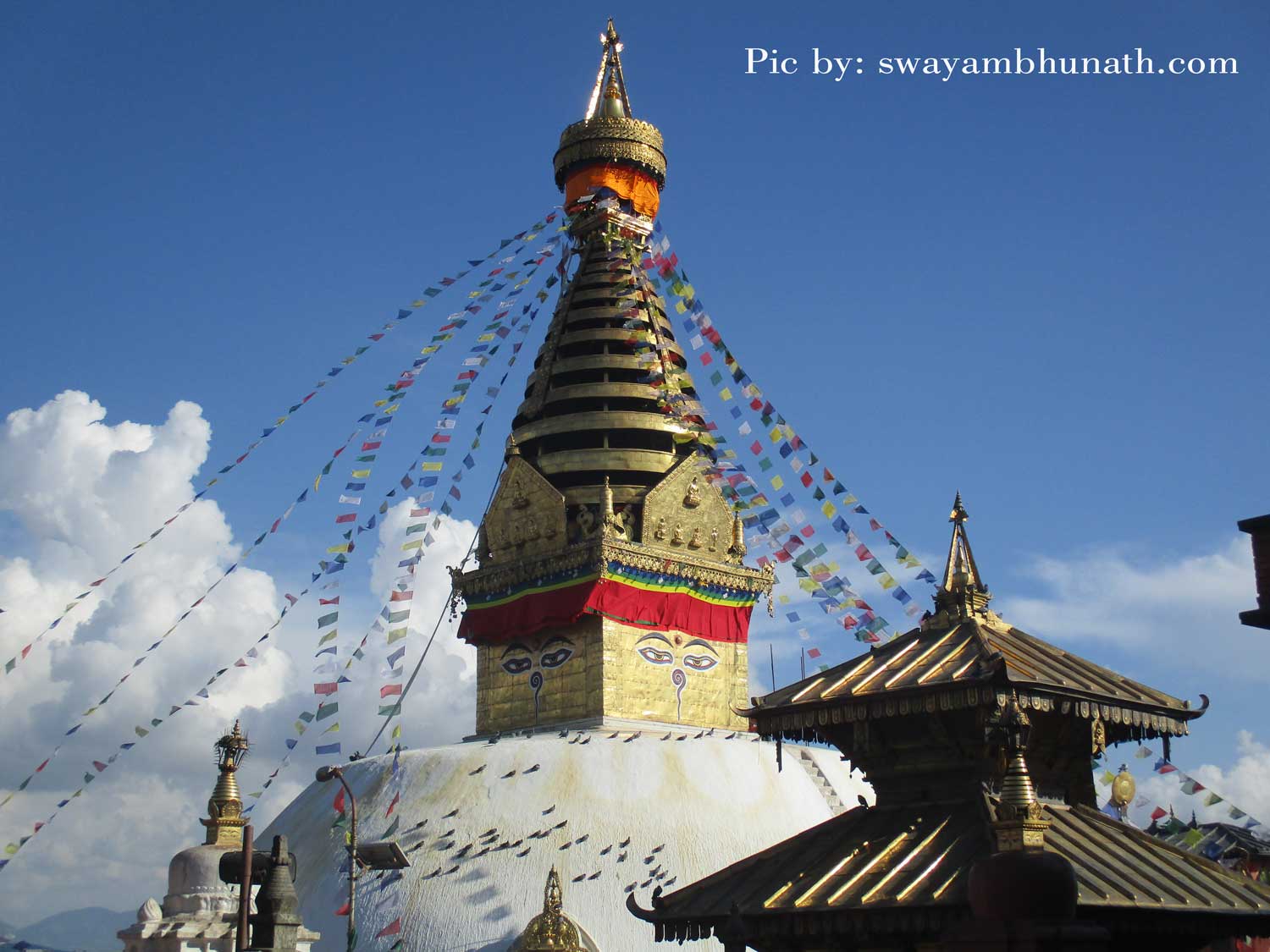 Swayambhu stupa (Devanagari: स्वयम्भू) is located to the northwest of the Kathmandu at the top of the green hill. Meaning of Swayambhu in Nepal Bhasa is ‘self-sprung’ or ‘self-manifested’. It is one of the most holiest Buddhist shrine which is the part of a UNESCO World Heritage since 1979. It is at least 1500 years old. It is also known as Swayambu, Swoyambhu and sometimes pronounce as shyamnu or the monkey temple. Hindu and Buddhist devotees go around the Stupa for spiritual awakening, inner peace and blessing. To get top of the pilgrimage, climb the 365 stairs from front side which is the most recommended route that pilgrims take to enter Swayambhu on foot. You can take a taxi to the top backside of the stupa. From backside you’ll get at the top only after few stairs. The boundary that separates Hindu and Buddhist is very blurred here as you’ll see a blend of Hindu and Buddhist which you may not see on other places of the world. 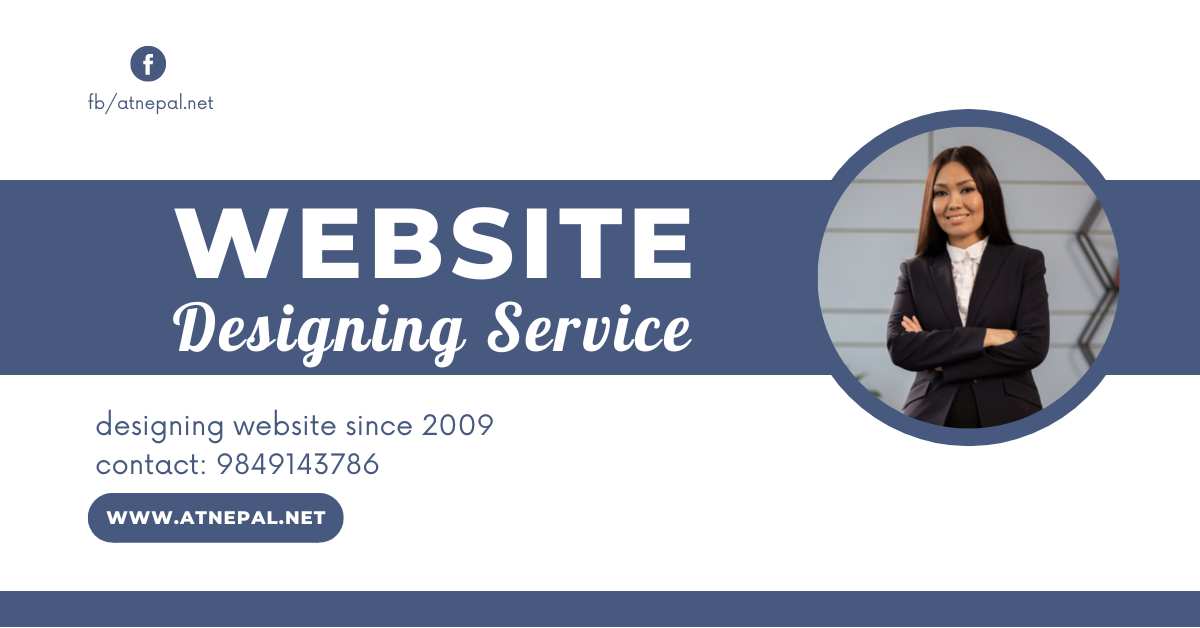 According to Swayambhu Purana (Buddhist scripture about the origin of Kathmandu valley and also provides information about the first and the second Buddhas in Buddhism), during the Golden age the entire valley was submerged under water. Vipaswi Buddha heard about the lake and he arrived with his disciples at the lake which was also known as Taodhanahrada. They noticed that here are many plants but not a single lotus, so Buddha planted lotus seed. Miraculous Lotus blossomed from the lake after eighty thousand years and the Swayambhu manifested himself in the form of an eternal self-existent flame, the Jyotipura over which a stupa was later built. Swayambhu mean “Self-Created.”

Time passed by and one day an enlightened Manjushri became aware of the lake when he was doing meditation on a mountain named “Panchasira parvat”. He found the lotus with eternal self-existent flame. After realizing this in his meditation he left the place to worship it and headed towards Taodhanahrada, present Swayambhu. He found a beautiful place filled with an enormous lake. Then he cut a gorge at Chovar with his sword to drain water to the south, thinking the site would be more accessible to pilgrims. The scar can be still found at Chobar gorge. The water drained out of the lake and the valley was formed which is know as Kathmandu today.

After many years Shantikar Acharya who came to Nepal on pilgrimage thought it might become difficult to preserve the light in future and requested guidance from Manjushree. Manjushri instructed Shantikar Acharya to build a chaitya over the flame to protect it, hence the stupa of Swayambhu was erected.

The whitewashed dome at the base represents the earth and around the base of the stupa, on each of the four sides of stupa you’ll find the statues of the Panch Buddhas (five Buddhas or Five Tathagatas) which has it’s own meaning. It represent the 5 cosmic elements (ether, water, earth, fire and air) which was introduced by Vajrayana as embodiments of the five cosmic elements. Each buddha strikes an identifying mudra(pose). In Nepal and Tibet Pancha Buddhas are the central features of Vajrayana Buddhism.

The Five Buddhas are:

Swayambhu stupa is one of the scared ancient Buddhist pilgrimage which has half sphere with a cube on top of it’s apex painted with eyes of Buddha looking in all four directions. It is filled with numerous artifacts and we can find a thirteen level golden spire. There are multiple shrines, temples, monastery and museum. Each open side of the cube faces north, west, east and south. On top of the cube are 13 tiers which represent the stages of spiritual realizations needed for Buddhahood. There are carvings of the Panch Buddha (five Buddhas) on each of the four sides of stupa. At entrance you will find two lion statues guarding.

According to the Gopalarajavamsavali, it was founded by the great-grandfather of King Manadeva(464-505 CE), King Vrsadeva in Licchavi peroid about the beginning of the 5th century CE. There is a damaged stone inscription found at the site which confirms it and indicates that King Manadeva ordered work done in 640 CE. However, Emperor Ashoka is said to have visited the site in the third century BCE. He also built a temple on the hill which is believed to be destroyed later and reason is unknown. It was damaged by Muslim army who invaled in 1349 which was later repaired. After the main stupa was constructed, other monuments were constructed one by one in different peroid of time by different dynasties and the eastern stairway is constructed in the 17th century by King Pratap Malla (the powerful king of Kathmandu). Yogin Sangye Gyaltsen added the wheel and spire in 1505 to the Swayambhu stupa’s dome.

The Shrines, Temples and places around the stupa

Shantipur – this is a place where a man is still alive doing meditation from 5th century without food and water.

Why it is called “Monkey Temple” ?

It is called the monkey temple by tourists as this sacred pilgrimage site is also home to hundreds of monkeys in the forest. May be tourists visited there and saw lots of monkeys and started calling money them which was easy pronunciation for them. It is believed that the monkeys in the Swayambhu reincarnated from the lice of Manjushri. He is among one of the Bodhisattvas. Name “Monkey Temple” was not given by local people. We think calling Swayambhu as monkey temple is totally wrong as it is the holiest Buddhist and Hindu religious site. It has both historical and religious importance.

The main attraction is white domed Swayambhu stupa, beside that there are numerous other ancient structures, Buddha statues, prayer wheels and flags etc. etc that drives your attention. Swayambhu temple is a holy place of Buddhists and very popular destination among foreign visitors.

City view: Swayambhu stupa is located at the top of the hill from where you can get the best view of Kathmandu. You can also view city from telescope which may be available at the top with a small fees. But we cannot guarantee that will be there at the time of your visit.

Forest: If you love nature then there is a small forest around the temple on hills. You might have good experience to be in a small forest in the city.

Sightseeing: This place is full of photogenic architecture and landscape, it is in the biggest hill near by Kathmandu. You can get beautiful scenic view of the entire Kathmandu city.

What is Swayambhu famous for ?

Where is Swayambhu located ?

Swayambhu is located in Kathmandu where you can get taxi, public transport to reach there.

Swayambhu is wordshipped by both Buddhists and Hindus. It is one of the oldest religious place in Kathmandu, Nepal.

When was Swayambhu Stupa established?

It is founded about the beginning of the 5th century CE but according to Emperor Ashoka he said he have visited the site in the 3rd century BCE.

You will see three eyes on Swayambhu stupa, between the two eyes you’ll see third eye which is also known as Wisdom Eyes or tesro netra (third eye) in Nepali. Swayambhu eyes means peace, the unity of all things existing in the universe.

Is it Free to visit Swayambhu stupa for tourists ?

There is a small fee for entering into Swayambhu for tourists. You’ll find ticket counter at the top of stairs just below big bajra.

Swayambhu can be visited anytime during day as it is very easy to reach there.

Gunla: Gunla is a month long one of the most important festival celebrated in Swayambhu which is celebrated yearly from July to September (Nepali month Shrawan-Bhadra) playing traditional musical instruments. During the festival devotees gather every morning with “Gunla baja” (traditional musical instruments). It is a period when rainy season begun. During those days this season is idle period as the paddy having been planted and farmers have free time. People engaged themselves in religious activities.

Buddha Jayanti: Buddha Jayanti is a Buddhist festival dedicated specifically to his birth, his enlightenment and his Mahaparinirvana (death). Buddha Jayanti is in April or May (Baishak in Nepali month) and it is also known as Buddha Purnima. During this day Swayambhu is decorated with prayer flags etc.

How to reach Swayambhu ?

The site can be reached from the main entrance, 365 steps stairway and the first sight on reaching the top of the stairway is the big Vajra. There is another entrance also which is from the top of the hill to the east. There is a car road around the hill from the south leading to the southwest entrance. If you don’t have habbit of walking or have leg pain then you can use path from car parking which is easy as compared to the main 365 steps entrance.

Other places near Swayambhu:

3 thoughts on “About Swayambhu stupa”